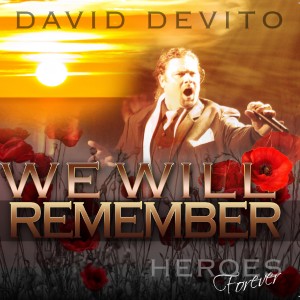 Performed at the Currumbin RSL ANZAC Day Dawn Service by David DeVito. 100% profits from sale of this CD is going to Soldier On.

WE WILL REMEMBER, is a modern ANZAC anthem written by David De Vito and dedicated to our soldiers both past and present.

Performed at the Currumbin RSL ANZAC Day Dawn Service. 100% of the profits from the sale of this CD will be donated to Soldier On (includes FREE shipping).

WE WILL REMEMBER, is a modern ANZAC anthem written by David De Vito and dedicated to our soldiers both past and present.

The inspiration for the song came to me when having a coffee with a friend who was explaining the multitude of emotions that come with living with a partner and 2 children in the military. The enormous pride and unmeasurable strength that comes from standing as one for a common cause mirrored in the solace dedication and vulnerable selflessness, really struck a chord with me as we discussed the deployments of her loved ones to dangerous places while we take for granted our free country.

Although I had always considered myself to be quite patriotic it was in that moment that my learnt Australian history hit me in a way I can’t explain – I became very emotional contemplating the ANZACS both past and present and 30mins later the lyrics for WE WILL REMEMBER were on paper ready and waiting for me to attempt to create music that could represent the emotion and message justice. I’m hoping that this song touches people and brings out the reflective emotion that was brought out in me during its creation process and as 1 all stand up and join me in singing WE WILL REMEMBER on ANZAC Day!

David De Vito was Australia’s best kept secret, until he was exposed to over 3million viewers per week on the 7 networks TV show “Australia’s Got Talent,” David De Vito took the Nation by storm and captured hearts from around the globe.   De Vito’s journey on AGT was powerful and heartfelt and has intensified his already successful career, performing to sold out audiences night after night, town after town. From private & corporate function to full theatre/stage productions, David never fails to impress beyond expectation.

David De Vito was born for the world stage and with quotes from the AGT judges like, “I’ve never been so moved by a vocal in my life,” (Brian McFadden) “Absolute perfection,” (Danni Minogue) “You are the Meatloaf of Opera, BRILLIANT, BRILLIANT, BRILLIANT,” (Kyle Sandilands) and with national media making favourable comparisons between De Vito and Pavarotti , who was considered to be the best tenor of all time and network 7’s Today Tonight predicting De Vito to be in the top 3 of the most successful artist from AGT, it’s no surprise David De Vito is sending shock waves through the music industry.

De Vito has always been associated with the entertainment industry from performing for his past restaurant customers to hosting TV segments on network 10, to being contracted by Liberation to write for many recognised National and International artists, to more recently being a successful solo Artist in his own right. David De Vito is rich with diversity, possessing the most impressive voice you’ve ever heard, capable of the most challenging operatic pieces through to the pop/rock genre, complimented by years of studying Classical piano and a Gary Moore style on guitar, topped off with his undeniable charm and quick wit, every David De Vito concert is tailor made to leave every audience wanting more.  If you don’t arrive at a David De Vito performance being an opera fan you will still leave a David De Vito fan, 100% Guaranteed.

There are no reviews yet.

Be the first to review “We Will Remember” Cancel reply