These are but some of the names and significant contributions that animals have given to their human counterparts during war times when soldiers are in dangerous zones and away from loved ones.

To honour the sacrifices that animals give, an Animal Heroes Memorial to commemorate animals who served in war, is being unveiled Sunday October 6, at Palm Beach Parklands. The tribute includes a statue and interpretive plaque that educate the public and recognise the service and camaraderie by some remarkable species. The celebration also coincides with World Animal Day.

The memorial, the brainchild of Currumbin RSL, has been jointly funded by GCCC, Anzac Day Commemorative Committee, Currumbin RSL and community support.
The first statue, a magnificent replica of a German Shepherd dog with his paw lifted in salute in a tribute to all war animals, will be unveiled Sunday in a formal ceremony held at the Parklands.

Chairman of the Veterans Support Centre, Joe Gates, says “This project honours the often unsung heroes of war –animal members of the forces that gave in many ways not least of which is companionship and smiles to their soldier mates.”

“Honouring their service and the bond that is forged between humans and animals during wartime is a marvellous initiative.” said Mr Gates. “This display will be a hit with families as a visual, fun and educational representation showing how animals play a large part offering services that humans may not be able to do.”

An initiative of and partially funded by Currumbin RSL Group, the Animal Memorial Trail is positioned perfectly at Palm Beach Parklands – many dog owners and lovers will see the fitting tribute regularly when walking their dogs on the dog friendly beach located nearby.

Mr Gates says, “Everyone loves a good news story. This is a feel good one that people will be able to relate to the message that we endeavour to deliver; wars affect such a huge part of society – Lest we forget. We do well to learn from our mistakes….. The Veterans Support Centre is here to help returned soldiers from all wars as they need assistance in so many ways.”
Members of the public are invited to view the formal unveiling ceremony at Palm Beach Parklands which starts at 10am this Sunday.

The Veterans Support Centre is here to help current serving and ex-servicemen and women and their families and can be contacted on 5559 5022. 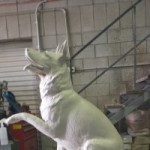